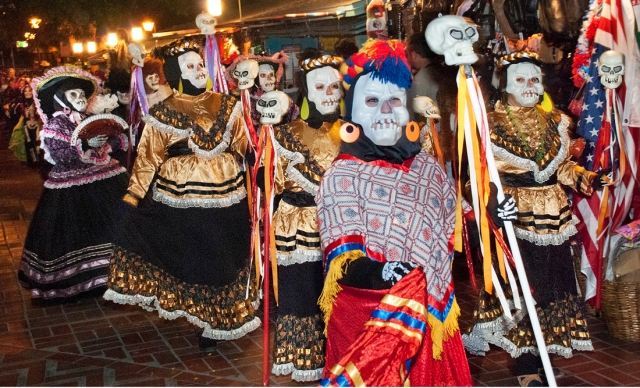 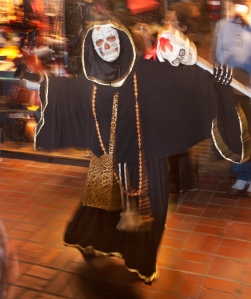 Calacas (skeletons) are dancing through Olvera Street in Downtown in celebration of Dia de Los Muertos (Day of the Dead ) – a Mexican cultural holiday honoring ancestors and departed relatives. The fiesta is a celebration with music, dance, and traditional calaveras, skull-shaped treats.

We succumb to the spell of exotic costumed dancers – particularly adorable kids – so we hopped on the Metro to Union Station, which is across the street from Olvera Street and El Pueblo de Los Angeles, for the traditional Dia de Los Muertos celebration.

The event is free and not as crowded as we expected. The mood was both festive and solemn – people were respectful and playful – as they honored the memories of departed. Colorful novenarios (processions) snake their way through the historic pueblo daily at 7 p.m. through Dia de los Muertos, Nov. 2. A solemn blessing of all participants begins the march of costumed revelers and musicians.

Dancers from the Tierra Blanca Arts Center perform in The Plaza for the Dia de Los Muertos fiesta. 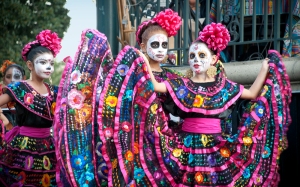 Young dancers from the Tierra Blanca Arts Center bring a festive mood to the celebration.

Folk dancing and family activities are offered on the weekend afternoons. Performers’ faces sport haunting skeletal designs, as do children’s and adults’ faces in the audience.

Celebrated in many areas of the world from Mexico to the Philippines, the holiday traces its roots to the ancient civilizations that were conquered by Spain and converted to Catholicism. Dia de Los Muertos is celebrated in connection with the Catholic holidays of All Saints’ Day (November 1) and All Souls’ Day (November 2). 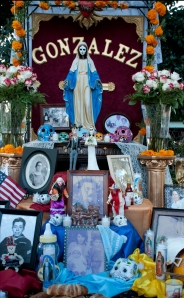 A carefully crafted altar honors the loved ones of an original Olvera Street merchant family.

Rituals include tending grave sites and bringing offerings, creating altars, and celebrating the balance between life and death. The Olvera Street Plaza is decorated with altars in tribute to departed loved ones.

Olvera Street and El Pueblo de Los Angeles area are major tourist attractions with a rich history. El Pueblo de Los Angeles, a State Historical Monument, is where Los Angeles was founded. Historic sites include Olvera Street, the adjoining Plaza, the oldest church in Los Angeles, the oldest building in Los Angeles (Ávila Adobe), 26 historic buildings, five museums, and numerous restaurants and shops. As with any tourist area, some restaurants and shops are more authentic than others. For those interested in the historic buildings,  free walking tours  are given regularly. 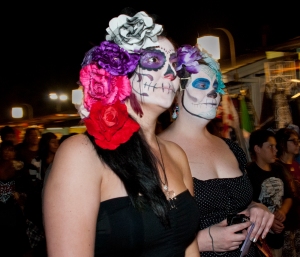 Use the exit from Union Station at the front of the building (near the Information Booth, facing Alameda Street), then cross Alameda Street to the plaza and continue to the fiesta!

If you enjoy our MetroDuo blog, please subscribe so that you’ll  be notified of new posts.

We don’t want you to miss a MetroDuo adventure!