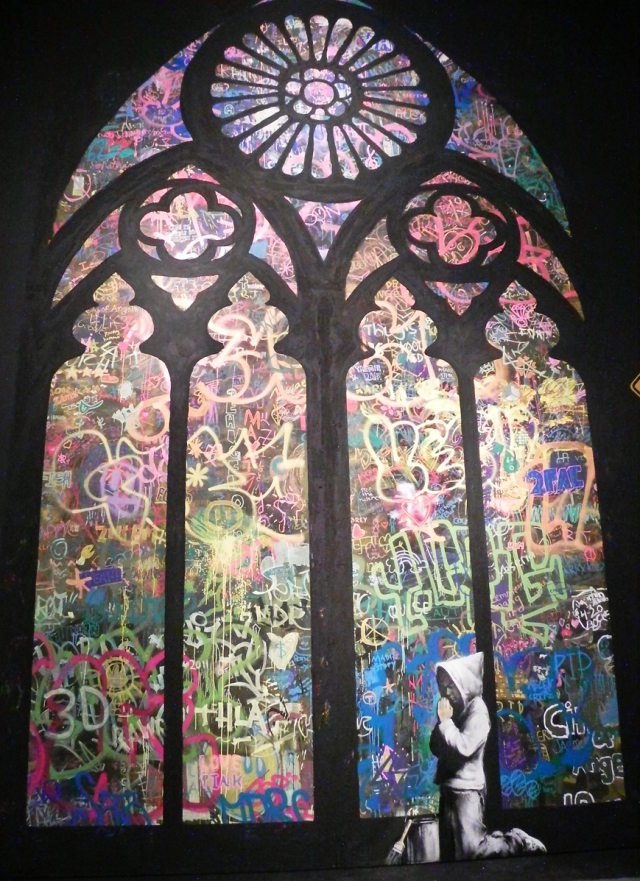 A tribute to graffiti created for “Art in the Streets” by Banksy and City of Angels School students. 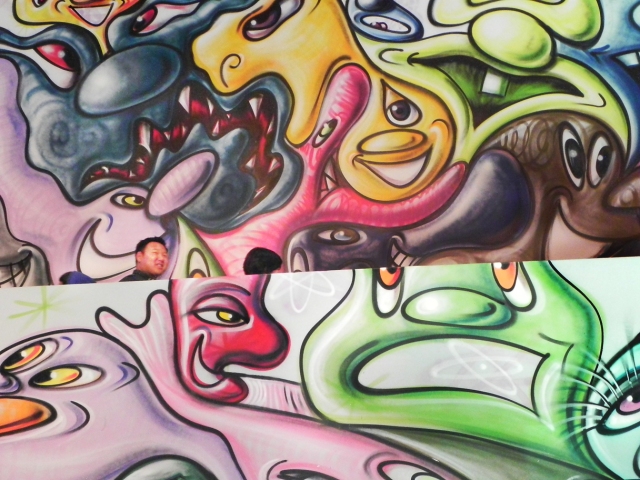 Museum goers seem to become part of “Painted Skate Ramp” by Geoff McFetridge and Lance Mountain at MOCA’s “Art in the Streets.”

The main wall says it all as you enter “Art in the Streets” at The Geffen Contemporary at MOCA.

The entry lettering – WOW – sums up the experience of “Art in the Streets” at MOCA.

The walls are a visual explosion of color and graphics.

Colorful street posters fill a room at MOCA's “Art in the Streets.”

We just popped in for an hour after a business meeting in Little Tokyo last Thursday, when evenings are free from 5 – 8 p.m.  Normally, admission can run $10.

In addition to Thursday evenings, you can avoid the admission charge Mondays from 11 a.m. – 5 p.m. and see amazing street art thanks to Banksy, the British street artist, who stated: “I don’t think you should have to pay to look at graffiti. You should only pay if you want to get rid of it.”

If the idea of paying to see graffiti seems strange, perhaps it is no more strange or controversial than the idea of staging a major art museum exhibition of graffiti and street art.

The strange/controversial reality of graffiti as fine art can be seen in “Art in the Streets,” which highlights the history of street art and graffiti  at the Geffen Contemporary at the Museum of Contemporary Art in Little Tokyo through August 8.

Some of the art by LA's Chaz Bojórquez is painted on the walls of MOCA’s "Art in The Streets."

If the exhibit’s concept isn’t controversial enough, its creation began with a censorship controversy as noted in the Los Angeles Times review by Sharon Mizota and documented in a video about the censored mural by Italian street artist BLU.  Ironically, the replacement mural, “Birds Of A Feather” by artists Lee Quinones, Abel, Cern, FUTURA, Loomit, Push, RISK and Sano, documented in a MOCA video, is also political.

This may be just one more example of the ephemeral nature of street art. We said the idea of street art in a museum can be strange.

MOCA Director Jeffrey Deitch described the exhibition as, “The first exhibition to position the work of the most influential artists to emerge from street culture in the context of contemporary art history.” The exhibit has a timeline showing the development of this medium and placing the artists in cultural context.

Almost every inch of the 40,000 square feet of exhibition space in this former police car warehouse (renovated by the noted California architect Frank Gehry) is covered with art – even the women’s restroom. 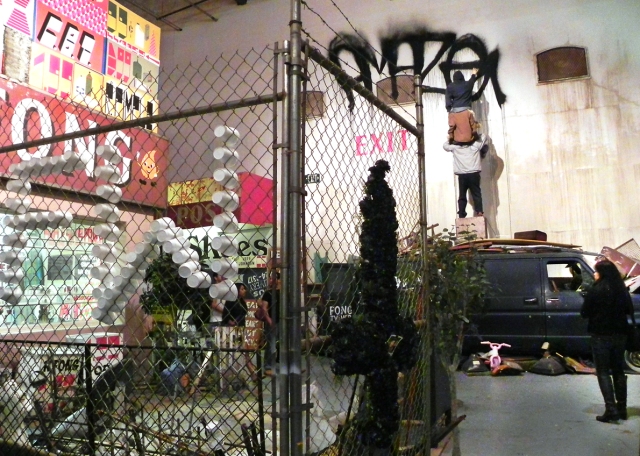 Animatronic taggers are part of a street installation at MOCA's "Art in The Streets."

Many pieces of art and several elaborate installations were created for this exhibition – and the show keeps changing as artists visit and make adjustments/additions. Street art is ephemeral, after all.

Many installations created for MOCA’s “Art in the Streets,” including this Church of the Open Tab, show irony/humor.

The abundance of images creates an enveloping experience.

We must come back for more.

“Art in the Streets” is free Mondays from 11 a.m. – 5 p.m. thanks to British street artist Banksy. 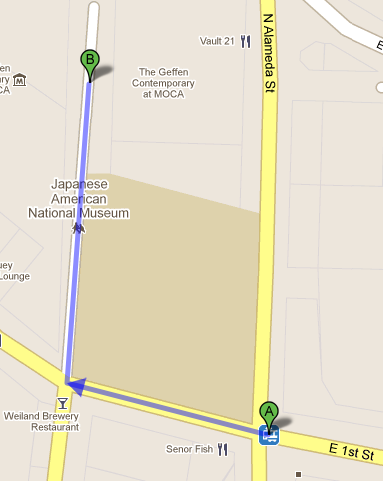 The Geffen Contemporary at MOCA is a short walk from the Little Tokyo/Arts District Gold Line station.

When exiting the Gold Line, cross the tracks and walk west along First Street. Turn right into the pedestrian mall alongside the Japanese American National Museum and continue north to the Geffen Contemporary at MOCA on your right.